The 25-year-old was mostly invited to speak about Bruno Lage, who had been an assistant coach at the Owls and is now in charge of Benfica.

Lage has been much praised for his work at the Eagles, as he managed to replace Rui Vitória in the middle of the season and now leads the club to a possible league title this weekend.

Asked about what made Lage different at Sheffield Wednesday, Lucas João told O Jogo: “Above all, delivery on the pitch. In the training exercises he was very serious but, after work, he was also the most playful person we could have, he defines very well what work is and what a joke is.

“The manager had finishing exercises programmed and executed with him, because he liked very much to work with us, the strikers.” 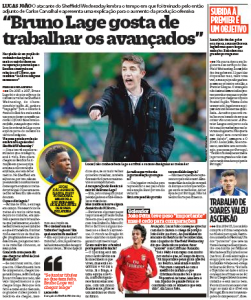 With Sheffield Wednesday finishing 12th in the Championship this season, the player claims he still dreams of getting promoted to the Premier League: “In this club we have everything, players and technical teams of great quality… I believe that with work and a lot of luck things will happen. The Premier League is close and it was one of the reasons that led me to England. I don’t want to leave here without realising this desire.”

But the player also claims to have big ambitions for the future: “I have a huge desire to play for a big club and I don’t rule out any of the teams in Portugal.”