Fans of the Champions League will be more than aware who Emmanuel Dennis is after his exploits in the competition this season.

The Club Brugge striker was at the double against Real Madrid earlier this month, bagging his side a famous point at the Santiago Bernabeu and writing himself into Brugge folklore.

Things could have been very different for the Nigeria striker this season though, had he gotten his initial wish and left the Belgian club during the summer transfer window.

A frustrating campaign last year, coupled with interest from Sheffield United and Monaco, had turned his head.

He was one of several strikers that the Blades looked at as part of their huge summer building job before they eventually settled on moves for Oliver McBurnie and Lys Mousset.

Sheffield United weren’t the only ones interested either, with Monaco also considering a move before turning to Leicester City’s Islam Slimani instead.

Dennis has no bitterness about the failure to secure himself a big move, instead saying he decided to stay because of his desire to work under manager Philippe Clement.

“I like this coach (at Brugge),” he told Het Laatste Nieuws when asked about staying, rather than moving to Sheffield United or Monaco. 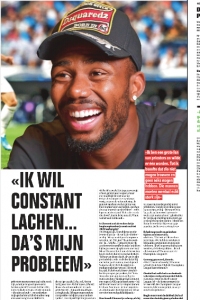 “It is not a criticism or a lack of respect, but normally I don’t watch the Belgian league. Genk was the exception last season.

“I enjoyed their matches, their way of playing football, how the coach remained positive – even when they were behind.

“‘That’s the coach I want,’ I thought to myself. Because Genk often won too.”