Kemar Roofe left Leeds United and made a switch to Anderlecht in August, just weeks after Vincent Kompany was appointed as player/manager at the Belgian side.

Prior to joining Anderlecht, the Walsall-born player spent his entire career in England.

Even though the 26-year-old’s dream was to play in the Premier League, Roofe has explained his decision to join the Jupiler Pro League side, during an interview with Belgian newspaper Het Belang van Limburg.

“Until last season I only knew Kompany from TV. You can imagine how big my smile was when the man suddenly called me,” the former Whites player explained.

“That smile is still set on my face. I was even amazed that Kompany knew me and without Vincent I would never have signed at Anderlecht.

“My dream is to play Premier League one day, but with Vincent I wanted to embark on an adventure at Anderlecht.”

Franky Vercauteren was appointed as the Belgian side’s head coach in October following a poor start to this season and Roofe has scored four goals in the last four league appearances.

He played under Marcelo Bielsa at Leeds United last season, scoring 14 goals in the Championship. The attacker is of the belief that playing under the Argentine had a role in Kompany signing him for Anderlecht. 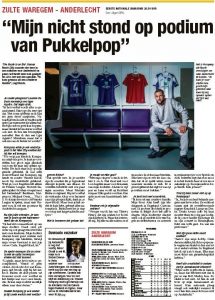 “That played a part. In your career, the coaches you encounter are often copies of each other. They tell the same thing with a few accents of their own,” he said.

“However, Marcelo Bielsa is original. He sees football as science. When you look at his teams for the first time, you think: it’s so complicated.

“But once you get the hang of it, everything happens automatically. Bielsa teaches you step by step with long tactical analysis.”