Home Europe Manchester United player has ‘come out of closet’ with desire for transfer...
SHARE

Tuttosport have Paul Pogba splashed across their front page on Friday, saying the Manchester United player still has love for Juventus.

It’s all been kicked off by Pogba sending a social media message to Leonardo Bonucci, calling him ‘Capitanoooooo’ and adding a few hearts-as-eyes emojis.

The Turin newspaper say, no less than three times, the midfielder has ‘come out of the closet’ with his desire to return to Juventus. They don’t believe it was a meaningless message, and instead choose to take the stance of it all being purposeful, and a little transfer flirting.

Pogba made his desire to leave Manchester United clear during the summer. Real Madrid was the intended destination, but the Spanish club’s president Florentino Perez isn’t as big a fan as Zinedine Zidane and simply wasn’t prepared to go to the financial levels needed.

Tuttosport explain Pogba has the same commercial appeal as Cristiano Ronaldo, so would therefore bring in money which the transfer fee would be offset against. That may be pushing it more than a little, Pogba has a combined 45m followers on Twitter and Instagram, whereas Ronaldo has 270m.

Anyway, it’s claimed that if it were his choice the Frenchman would ‘reverse the route from Manchester to Turin even immediately’. 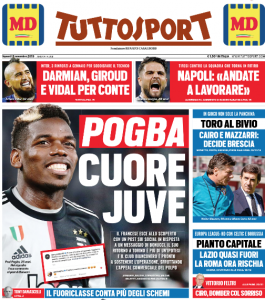 The feeling is mutual, but then it all comes back to cost again. Tuttosport say Manchester United wanted ‘no less than €150m’ in the summer, although they suggest €120m may be enough because it would still represent a good capital gain for the English club, given his transfer fee has already largely been amortised.

Interest from Old Trafford in Mario Mandzukic, Blaise Matuidi, Emre Can and Daniele Rugani is seen as a way to get the price down.

Paul Pogba last played for Manchester United on September 30th, and it doesn’t seem like he’ll return until December at the earliest.