Despite once being called the favourites for the signing of Benfica striker Darwin Nunez, Manchester United’s position in the race seems to have changed a lot since they missed out on a spot for the Champions League next season.

A proof of it today is the way newspaper Record treats the Red Devils in a front page story they feature on the striker’s future.

The outlet talks about the big impact the European final should have on Darwin’s departure from Benfica, since the clubs involved in Saturday’s game are two of the ‘big interested’ in his signing.

Then besides mentioning Liverpool and Real Madrid, Record writes that Manchester United are ‘running on sidelines’ to land the striker. 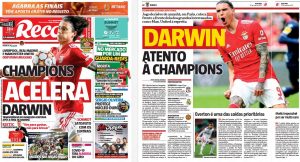 It’s said that despite not being in the Champions League, the Red Devils are ‘decided to convince Darwin’.

Erik ten Hag is said to be a fan and wants to make the striker a ‘reference’ in the team.

The newspaper also points out that Manchester United have the ‘financial capacity’ to compensate their lack of Champions League competition.