Towards the end of September, we covered a report from the Catalan media which explained Liverpool had broken Barcelona.

The club were having a rocky start to the season, and claims were building that there was a mental issue for players which dated back to their Champions League exit at Anfield.

The club were ‘in a state of shock’ since the 4-0 defeat, described as one of the ‘cruelest’ in Barca’s history. They were ‘unable to move forward’, and following a defeat to Granada it was stated ‘every day is Liverpool’.

Barcelona’s players were ‘trapped in Anfield’, unable to shake off their horrid night.

Mundo Deportivo reports the whole club has a ‘mental issue’ dating back to their time on Merseyside, and it’s even infecting new signings such as Antoine Griezmann.

As soon as they face adversity, they collapse, and this happened again at the weekend with a 3-1 defeat to Levante. 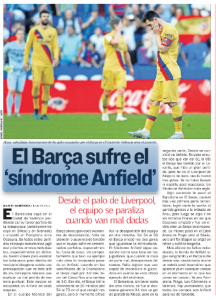 Away matches are proving especially difficult, and AS says the club is suffering from ‘Anfield syndrome’.

It’s once again stated the club is ‘paralysed’ and falls to pieces when shaken away from the Camp Nou. Barcelona’s ‘wound continues to bleed’ and the team is suffering from ‘post-traumatic stress’.

Typically dramatic from the Spanish media, but it appears ‘Anfield syndrome’ is a real thing for the Blaugrana.