Every summer is like a broken record for Manchester United fans, as rumours swirl that their club hold an interest in Kalidou Koulibaly.

It’s happened for the last three years or so, and yet, each time, nothing comes of it, with the Red Devils preferring to spend big on Raphael Varane last month instead.

There will be few, if any, complaints about the choice, but that didn’t stop multiple sources claiming that a bid was made by Manchester United to try and acquire the services of Napoli’s Senegalese rock.

Gazzetta dello Sport on Thursday, however, dismiss that notion entirely, pointing out that ‘there has been talk of a €50m offer from Manchester United, but the owners have said that no requests have ever arrived’. 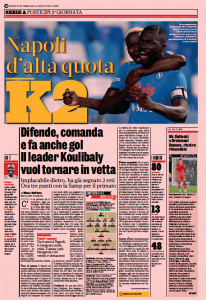 To them, ‘this suggests that if the defender is still here, it’s only because no convincing offers have arrived’.

For Napoli, that’s not a problem, since Luciano Spalletti is thrilled to have his defender, who has been instrumental to his club’s early season form.

As for Manchester United, they have Raphaël Varane, and the idea of signing Koulibaly is now probably long gone.