Sevilla seem to have shaken off the Las Palmas attention and be close to completing their deal to sign Roque Mesa from Swansea City.

Last week it was reported several times in Spain that Sevilla were very close to a deal to sign the player, but then Las Palmas showed up wanting to disrupt things.

Las Palmas believe they have a first option with Swansea and given they don’t get on well with Sevilla it was a chance to annoy their rivals, but Mesa himself seems to have plumped for the Spanish mainland. 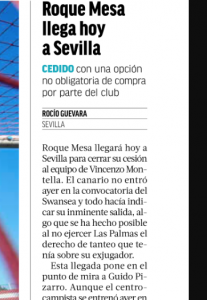 the Swansea player will travel today to complete the transfer.

Whilst Marca don’t state the type of a deal, it’s been previously reported Sevilla will loan the player and have an option to buy him in the summer transfer window.

This one looks almost done, unless Las Palmas try to wreck things again.

Sven Mislintat looking to sign Arsenal man – Hoping to use...