Amin Younes is on the verge of being announced a Napoli player, insisting on the move after turning down an option to join Swansea City.

It’s probably not the outcome which was best for Ajax, as explained by De Telegraaf on Thursday. The Dutch newspaper say Swansea had offered €10m for Younes during the current window, and that amount would have been acceptable to Ajax.

Younes knocked that option back and only had eyes on a switch to Serie A club Napoli, forcing Ajax to take the Italian club’s efforts seriously. 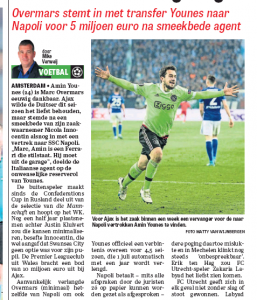 With the danger of losing Younes for free at the end of his contract, Ajax ended up accepting €5m from Napoli, which is half of the Swansea offer.

There will be bonuses on top of that but there could have been with the Swansea option as well.

Younes will be earning €1.5m a year after tax at Napoli so it’s not huge wages he’s moved for.

The situation shows just how difficult it is for Swansea to recruit good players this month, given their position in the Premier League.