In a transfer race there always has to be losers, and Manchester United get their fair share of claims in that regard. To say the club have been beaten to a player always adds a little more drama, even though it’s often questionable.

Achraf Hakimi is the latest in a long line of players to have allegedly snubbed the Premier League club. Spanish newspaper AS report Real Madrid have been planning his sale for some months.

Having had a successful period on loan at Borussia Dortmund, Hakimi made it clear to Madrid that he didn’t want to return and be a back-up option to Dani Carvajal. The player then started to listen to ‘offers’ he was receiving, with Manchester United, Bayern Munich and Inter Milan being in ‘the lead’.

Antonio Conte has promised a starting place to Hakimi, and that’s what has swung it for Inter, with it thought a move will be completed in the coming days for €40-50m. 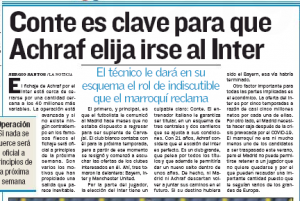 Hakimi can play anywhere on the right side, but didn’t seem an obvious target for Manchester United, making the claims questionable. He’s probably not a real Jadon Sancho alternative, and at right back the signing wouldn’t make sense given the existence of Aaron Wan-Bissaka.