In his final summer window at Juventus, Álvaro Morata was one of the players Paratici signed for the club. The striker arrived on a two-year loan deal from Atlético Madrid, with an option to buy for €35m.

On October 10th, Calciomercato reported the Old Lady are reflecting on buying Morata since they are interested in Dušan Vlahović. The Fiorentina star’s arrival will close the door for the Spaniard to join Juve on a permanent deal.

Therefore, the ex-Chelsea man ‘has become one of the first market objectives of Tottenham’, because Spurs ‘will almost certainly face’ Harry Kane’s exit next summer.

Calciomercato’s report is based on the assumption that Kane is expected to leave the north London club and they will then target Morata. 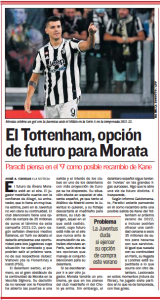 Morata can only arrive at Tottenham if Juve decide not to buy him and if he has no place at Atlético, then he has to find a new club next summer. Even if all these series of events fall in place, he will only be considered by Spurs if Kane leaves the club.

These claims have travelled across Europe, including England and now Spain.

AS on Friday state Vlahović’s decision to not sign a new deal at Fiorentina has impacted Morata. Along with Juve, the Serbian is also wanted by the La Liga side.

Spurs could be an ‘unexpected avenue’ for Morata if the Old Lady decide not to buy him at the end of this season.

When relaying Calciomercato’s claims, AS say ‘Paratici would be thinking’ of Morata to replace Kane. Although the Italian website haven’t mentioned Spurs’ willingness to pay any fee, AS add from their own pocket that Nuno Espírito Santo’s side could even offer €35m.

Sport, after mentioning the Italian report, went ahead to state Tottenham ‘appear as a possible lifeguard for Morata’. They say the attacker’s future is ‘very uncertain’ since Juve have other plans.

Regarding Calciomercato’s report, Sport say ‘the English club will go for Morata if the departure of Harry Kane is finalised’. 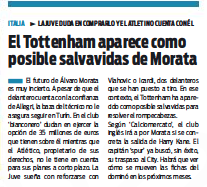 That’s not what the initial claims were, but here we are.

What started as a suggestion from Calciomercato, with so many ifs and buts, has now led to a full fledged report stating Tottenham ‘will go for Morata’ if Kane leaves the club.