Sporting youngster Tiago Tomás was featured on Sunday’s front page of O Jogo to talk about the upcoming season.

Following his first full year as a professional, in which he had six goals and three assists in 37 appearances, the striker is now ready to fight to keep his place in the starting team and to try to win the league title again.

Now like most Sporting youngsters, Tomás was this year linked to big European clubs such as Arsenal and Roma. O Jogo highlighted those rumours pointing out that the player is a ‘self-confessed fan of Thierry Henry’, and asked him about a potential exit from the Lions.

“I’ve always been focused on Sporting. This is where I want to stay and, honestly, the market completely misses me,” Tiago Tomas told O Jogo. 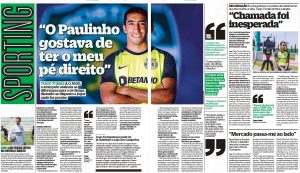 Arsenal were the only Premier League club to be linked to Tiago Tomás this year.

The big problem has always been that Sporting don’t seem keen on selling the striker this summer, and the message sent through the Portuguese media is that to sign the youngster, clubs will need to trigger his €60m release clause.