After strong claims saying Bruno Martins Indi was joining Stoke City today, there are finally more details about the transfer. 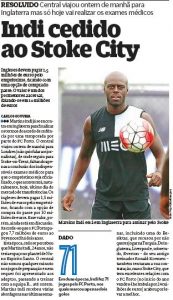 O Jogo says that Stoke will pay €1.5m for a one-year loan. They claim that the buying option price is still being discussed, but it shouldn’t be a problem, as the talks say it will probably be set at €10m.

According to the Portuguese newspaper, Liverpool and Everton have tried to sign the player, but Porto’s good relationship with Stoke City has favoured the Potters. That claim may well be a little window dressing for the deal.

Another Portuguese newspaper Record states that the buying option will be €10m. They also say that Stoke City are ‘solving one of Porto’s problems again’, since they already signed Gianelli Imbula from the Portuguese side in January for €24m.