Home Premier League From Barcelona: Suggestion West Ham may not have lost transfer to Southampton...
SHARE

Over the last few weeks, we have carried multiple reports talking about West Ham United’s interest in signing Barcelona defender Marlon this summer.

The Catalan club allowed the Brazilian to join OGN Nice on a two-year loan deal last summer. As a part of the deal, the French club had an option of signing the 22-year-old on a permanent deal in 2019.

Mundo Deportivo reported on June 25th that Manuel Pellegrini’s side were in pole position to secure Marlon’s signature. They also mentioned interest from an unnamed Premier League club in the player.

That club became clear at the end of last week, when Catalan newspaper Sport reported Marlon was ‘one step’ away from a Southampton transfer. The deal was presented as almost done and the Saints had submitted a €12m formal offer. 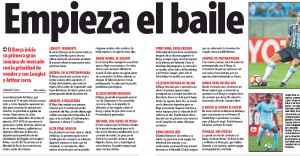 Mundo Deportivo today state West Ham were first interested and then add that Southampton have ‘joined the bidding’, willing to offer €12m.

It certainly doesn’t sound as certain as Sport were on Friday, so perhaps West Ham aren’t out of this race yet.