As Gazzetta dello Sport present it, AC MIlan are currently hoping Wolves can help save their summer and make a swoop for Andre Silva.

It’s a different and yet pleasing situation to be in for the Premier League club. Wolves are paired with AS Monaco, once again, as the strongest option for Milan to sell Silva during the current market.

The Portuguese striker had a poor first season in Italy following a €38m move from FC Porto last summer and he’s the most obvious exit option for the Rossoneri.

Wolves and Monaco are both said to like the player, which probably means Jorge Mendes has told Milan those clubs could be option, and Gazzetta dello Sport state the two are ‘always attentive to young talents and perhaps willing to invest a sum close to the €38m paid’. 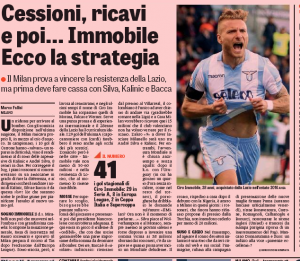 That has to be considered unlikely and if Milan want a straight sale rather a loan deal with clause gymnastics then they need to lower the figure they’re hoping for.

Mendes is obviously very good in the transfer market, but he’s surely not able to get a club to pay €38m for Silva this summer. The 22 year old didn’t help his cause much at the World Cup.