After being a daily thing for a week or so, Marlon to West Ham went quiet in the Catalan media, but there’s now an explanation of the situation from Mundo Deportivo.

In their Monday edition, the Catalan newspaper has a Barcelona transfer special and Marlon gets his own little section and a mention in the general article on the club’s exits.

In the general section it says the transfer of Marlon to West Ham had been ‘taken for granted’ which is why Barca brought him back from Nice halfway through his two year loan.

Then in Marlon’s own article it’s explained Barcelona have been in talks with West Ham and the club remain ‘in pole’ to complete the signing. 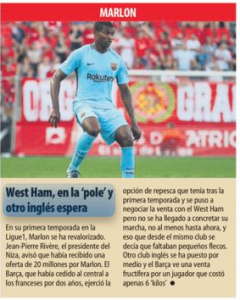 Talks are continuing even though nothing has materialised yet, and from an optimistic stance, Mundo Deportivo say it was considered only the ‘fringes’ of a transfer needed finalising to make it happen.

Should West Ham interest be as concrete as has been presented then they may need to hurry, with it being stated there’s now another, unnamed, Premier League club in the running to sign the defender.