Thierry is said to have offered Madrid the ‘possibility of signing his son’ and told the Spanish club that Chelsea renewal talks have been left ‘paralysed’. With no Champions League football next season it’s claimed Eden feels that now is the right time to start a ‘new adventure’.

Zinedine Zidane has long been a big fan of the Chelsea player, but the Frenchman leaving Madrid ‘does not diminish the chances of the skilful Belgian midfielder wearing white’, according to Marca.

Eden Hazard is described as a back-up option for Real Madrid, in case it becomes clear there’s no hope of signing Neymar from PSG. A transfer fee for the Chelsea player is estimated at €120m which is surely less than the English club would estimate it at.

The Belgian international is said to look kindly on the move because he’d like a style of football which suits his talents better than he feels has happened at Chelsea in recent years. 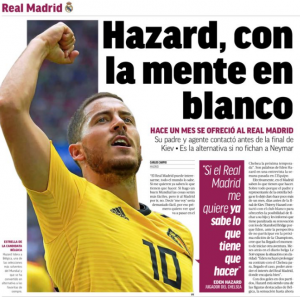 Marca aren’t just talking the potential move up without any caveats, and the Spanish newspaper end their article by saying: ‘The biggest objection to his signing may be that he plays in an area where Madrid has several of the best: Isco, Asensio, Bale… But if Neymar does not arrive or Bale insists on leaving the options of Hazard will increase.’

So let’s all count down to the Bale-Hazard swap claims.