Jasper Cillessen to Liverpool has gone a little quieter in the Catalan media over the past week or so, perhaps because he’s not at the World Cup after the Netherlands failed to qualify.

In their Monday edition, Mundo Deportivo have a feature on possible Barcelona sales and there’s a Cillessen article, and some Liverpool claims included in it.

Liverpool are said to have been ‘probing’ the signing, although it’s not made clear whether the contact has been with the player or his club. Given the way the market works these days it’s probably the goalkeeper’s representatives, if of course there’s truth in the claims.

On his side, Cillessen is said to have told Barcelona he’s not entirely happy with his situation, and asked that any offers be considered. 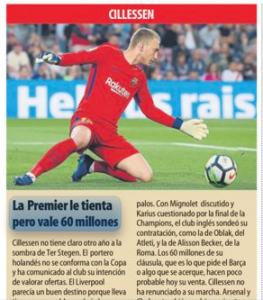 Arsenal and Chelsea are also credited with interest but it’s halfhearted, and with the Gunners signing Bern Leno that probably rules them out of the race.

Cillessen has a buyout clause of €60m in his Barcelona contract and despite some Catalan reports claiming the club would insist on that amount, he’d almost certainly be available for less than half the figure.