The links go back many months and it’s usually the same slant given: Southampton are keen on the player, he’d like to stay at Barca, the Catalan club would consider selling for a good price.

Alcacer’s agents are said to have received calls from interested clubs, although none of those approaches have so far turned into concrete offers for the former Valencia player.

Southampton interest has been passed between the Spanish and English media continually, and whilst the club are directly named once again, along with Fenerbahce, there doesn’t feel to be a lot it in.

Just like Andre Gomes being linked to Tottenham repeatedly, Southampton and Alcacer seems to carry on just because it started. 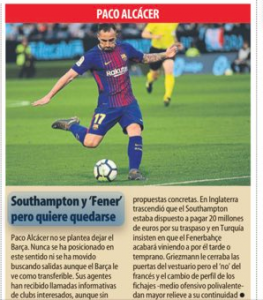 Antoine Griezmann deciding against a move to Barcelona this summer makes Alcacer’s situation a little better, but it’s still likely Barcelona would consider a sale if approached with a good offer.

What is a good offer for the 24 year old striker? The figure of €30m has been pushed around a few times.