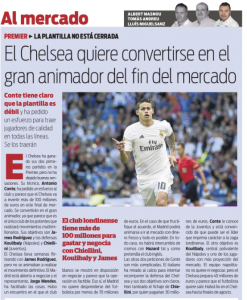 Catalan newspaper Sport have an article on Monday saying Chelsea will splash more than €100m in the last days of the transfer market.

They claim that Antonio Conte’s priority goals are to sign James Rodriguez from Real Madrid, Kalidou Koulibaly from Napoli and Giorgio Chiellini from Juventus.

On the Colombian’s case, Sport says that Chelsea have been flirting with Rodriguez for weeks, but only now made an approach.

They claim the clubs have met, Madrid showed they’re available to negotiate and the transfer is feasible.

Sport treats the other signings as “more complicated”. They claim Conte wants to spend €40m on Koulibaly and €30m on Chiellini, but it’s still hard to see where are these negotiations going. It just looks like Sport guessing.

Especially because this €70m price was originally claimed by the Sunday Express, who said Chelsea would be offering this figure, so it would be too quite perfect if it was exactly what Real Madrid are demanding.