Throughout the summer, we covered the various reports surrounding Southampton’s interest in David Okereke, now at Club Brugge, but who was then at Spezia in Serie B.

The Nigerian attracted a lot of interest around Europe, and while his dream is to play in England, his inability to gain a work permit at this present time proved a hurdle difficult to overcome for the Saints.

The story was a recurring one over the past few months, but Southampton’s desire to sign the youngster actually dates back to January.

Speaking to Sport/Foot Magazine in Belgium, Spezia’s director of football, Guido Angelozzi, explained: “Juventus wanted to buy him for their U23s who play in the Italy’s third division. Genk were also interested, just like Southampton.

“The English even came here to talk, and they even had a chat with David, but because he still hadn’t played for the Nigerian first-team, he didn’t get the work permit”. 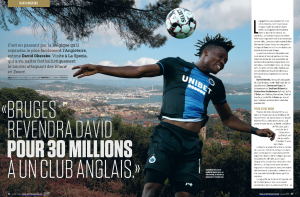 The player eventually went to Belgium, choosing to do so over a move to Serie A at Sassuolo, who offered the same amount as Club Brugge.

Why did he do that? Angelozzi said: “It’s simple. David wanted to go abroad. He thought that by going to Bruges, he would be able to go to England more easily”.

However, if they do want to sign him once he can get a work permit, he’ll just be a bit (or a lot, depending on performances) more expensive.