Home Premier League Source close to manager confirms West Ham have been in touch about...
SHARE

The Chilean media have their own angle on the Arsene Wenger story, saying Manuel Pellergini is line to take over from the Frenchman and has already been approached.

It sounds far fetched and some PR on behalf of their compatriot, but La Cuarta are pushing the story in their Saturday edition, and suggest Pellegrini could be tempted away from China in the near future.

Right at the end, West Ham get a mention.

It’s stated that as ‘unveiled by The Sun’, the source who confirmed contact from the North London club has also confirmed the West Ham story to be true. 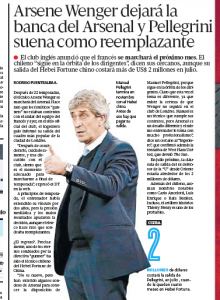 David Moyes isn’t doing too bad a job with the Hammers, but was never the most glamorous appointment and the marriage of convenience may well be a short one.

Knowing the kind of reports La Cuarta do, this does seem like some PR for Pellergini, perhaps using Premier League clubs to get the manager a better Hebei Fortune contract.