The French reporting of Everton’s asking price for Idrissa Gueye is inconsistent to say the least.

Thursday’s edition of L’Equipe branded the Premier League club ‘greedy’ for demanding €45m for the midfielder, who PSG want to sign during the current transfer window.

Friday’s edition of Le Parisien also labelled the club ‘greedy’, but this time said the amount requested was €40m.

Monday’s edition of L’Equipe claims Everton have set a ‘specific amount’ for the January move: €30m.

There’s zero explanation from the French newspaper about changing their figure by €15m in three days, and they don’t even mention the old claimed price once.

What they do say is that a few weeks ago the English club decided internally that €20m was the right price, and the increase is down to the ‘Paris effect’.

Of course, this makes the whole thing seem incredibly unreliable, at least on price, but it’s thought a deal is getting closer. 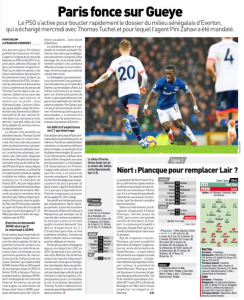 Gueye is now described as PSG’s ‘priority target’ and it’s claimed the midfielder spoke to Thomas Tuchel on Wednesday, a conversation which the manager used to tell the player what his role would be.

The clubs initiated contact over the weekend, and things have ‘accelerated in recent hours’.

Agent Pini Zahavi is right in the middle of proceedings, and it’s stated he’s also working on getting a replacement for Everton.