They claimed that it was all agreed between Lions and the player, but now the Foxes would have to accept paying half of his salary during the loan until the end of the season.

That was a big story from Record, but today, their update is rather small, and actually discourages Sporting fans regarding their club’s efforts.

Record now claims there are other clubs interested in Adrien, and since he may not be a Leicester player in the near future, it’s possible he will consider a permanent destination, not just a club to have a loan spell with. 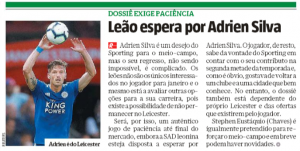 So it all should depend on the offers Leicester City will get for the player in the January window, while Sporting will be waiting until the end of the month to see if Adrien will still be available or not.