Everyone in the world of football knows Daniel Levy, at least by name.

The Tottenham chairman has a reputation that follows him around, one of a tough negotiator that most people who have dealt with him in a business meeting will vouch for.

Other than that, the 57-year-old remains a rather mysterious figure, with very little about his personal life or what he’s like as a person filtering through in the media, so L’Equipe, on the eve of the biggest game in Spurs’ history, decided to try and find out.

Even then, their efforts weren’t all that successful, giving their readers a bit of background history on Levy, most of which can probably be found on Wikipedia.

However, they did manage to get hold of Hugo Lloris, who gave some insight as to what the Tottenham chairman is like on a day-to-day basis. 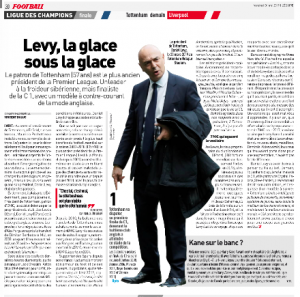 He said: “It’s true that, with him, the business side is more visible than the human side. He doesn’t show anything, but in Amsterdam, after qualifying for the final, we made him jump around and dance in the dressing room, so I think he’s a bit shy. And his track record is incredible.

I speak with him four to five times a year, and he sends messages, sometimes… But he isn’t like ‘Loulou’ Nicollin or Maurice Cohen, my president at Nice, or even Jean-Michel Aulas, for whom I have a lot of admiration and ensured life at Lyon was really pleasant. In our relationship with Levy at Spurs, there is no paternalism”.

Despite suffering multiple delays in the opening of Tottenham’s new stadium, Levy managed to eventually get his team out of Wembley into their new home, and it’s fair to say it was worth the wait.

Even if the London club don’t lift the Champions League on Saturday, there’s no denying what the former Rangers director has built over the years, and he’s shown you can do it without being the centre of attention.

“We needed to talk to each other” – Player on controversy...