The Portuguese press continues to say that Sporting and Wolverhampton Wanderers now have the ‘doors open’ to find a deal for Rui Patrício.

Newspaper A Bola comes up with a very informative article today explaining how things have developed in the past few months.

It started when Wolves wanted to pay €18m for Patrício. They had offered such a low amount because the player was ready to rescind his contract with Sporting due to the attacks at Alcochete. The Lions had accepted it at first, but then president Bruno de Carvalho demanded €1m more. That’s when the English side gave up on the deal and got him for free.

Bruno de Carvalho was voted out of Sporting, and since then the temporary board had been working to put the club back on track. They resumed contact with agent Jorge Mendes, and started to line up a deal with Wolves once again. 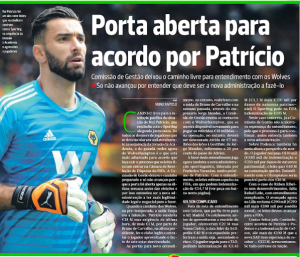 Now according to A Bola, the temporary board had been waiting for the elections so the new president could conclude this deal. Frederico Varandas was elected last Saturday, which means that this story should soon be over.

Wolverhampton are expected to pay the same €18m for Patrício, and from all the players who rescinded their contracts and signed for other clubs, he’s the one who’s closest to sorting things out with Sporting.

With the clubs finding an agreement, Sporting should take out their complaint to FIFA which demanded Wolves pay €54.7m for the goalkeeper.