When Marcelo Bielsa was announced as Leeds United manager, it received coverage around the world. The Argentine manager getting off to a flying start has also been the subject of widespread attention.

World sport media will hope it goes one of two ways: A glorious return to the Premier League for Leeds, with Bielsa the cult hero ready to take on the big boys, or crash and burn.

Groundwork seems to be being laid for the latter.

This morning there was a headline in Argentine newspaper Ole reading ‘They got angry with Bielsa’.

It all comes from Patrick Bamford picking up an injury in an U23 match, and the slant is that fans are furious with their manager for playing him. 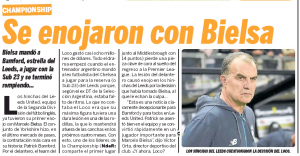 Leeds fans’ ‘first anger’ with Bielsa comes because of the ‘crazy’ decision.

We ignored it, because it clearly looked like they’d misread one of the inevitable ‘These Leeds United fans aren’t happy with Bielsa decision’ articles.

But now there’s more from Spain, with Sport taking things a step further, going with a headline saying: ‘Bielsa, from love to hate for Leeds fans’

Bielsa’s ‘latest madness’ has ‘cracked the relationship’ he had with the Elland Road faithful.

The coverage is plainly ridiculous. There’s regret over Bamford’s injury, but the feeling most Leeds fans have for Bielsa certainly hasn’t been shaken… that’s not so great a story, though.