Ruben Neves is again on the front page of Tuttosport today, but now he’s joined by David de Gea and James Rodriguez.

The idea is the Wolves player would move to Juventus in the January window, and then the other two can be targeted for summer transfers.

This was all said by the same Turin newspaper on Thursday. They talked about the interest, the idea for it to be a January transfer for Neves, rather than waiting until the summer, and the influence Jorge Mendes would have over such a deal. There was a meeting held in Milan on Wednesday, and the midfielder was a topic of conversation.

Mendes took Cristiano Ronaldo and Joao Cancelo to Juve in the summer and has built good connections at the club, whilst his relationship with Wolves is well known.

What is new today, at least from a Tuttosport perspective, is Manchester City being brought into the picture. Competition for the January transfer comes in the form of Pep 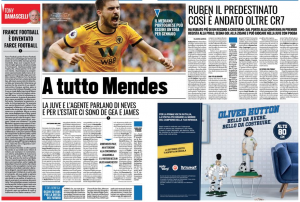 Guardiola’s side, who are described as an ‘obstacle’.

There’s no further information on an approach, on any offer, or even what the estimated transfer fee would be. Tuttosport suggest Juve would have an advantage over Manchester City because of the Mendes connection.