Liverpool welcome Real Madrid to Anfield on Wednesday evening, for the second leg of their Champions League tie.

Zinedine Zidane’s side have a 3-1 victory from the first leg to protect, and will be hopeful of progressing to the next round of the competition.

Even without the benefit of supporters backing them on Merseyside this week, Jurgen Klopp will be hoping that playing at home can have some benefits for his Liverpool side and help them overcome the two goal difference.

Real Madrid will fly into England on Tuesday, with AS detailing the club’s plans for the trip.

The Spanish newspaper states Los Blancos will depart from the Adolfo Suarez-Barajas airport at 11am local time today, on flight IB2850.

Madrid’s flight is expected to last just over two hours, and after arriving in Liverpool they’ll travel straight to the city’s Titanic Hotel. 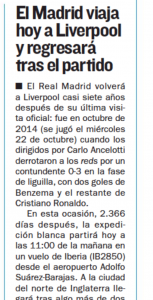 A late lunch will then be had before the trip to Anfield, where 18:15 press conferences will be followed by training at 19:00.