Luís Castro to Reading is a story which has grown hugely in Portugal over the past couple of days, and subsequently been picked up by more local media who are somewhat taken aback by the situation.

The Vitória Guimarães manager is thought to have a buyout clause of €1m, and it was claimed in Portugal that officials from Reading had travelled to the country to deposit the money.

Castro himself was asked to comment on the matter at his pre-match press conference on Friday, and he said he’d rather speak on Monday, although his words made it very clear there’s something going on in the background.

Saturday’s edition of Record reports that Reading have offered Castro a package, including total salary over the period and bonuses, which could be worth a total of €11m. 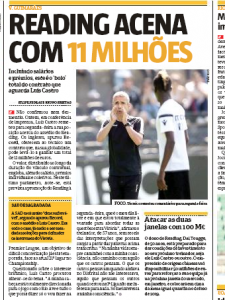 They also claim Dai Yongge is willing to invest €100m at the club over the next two transfer windows. A huge €50m in the winter and the same again next summer.

That sounds too good to be true and could have FFP implications.

To be fair to Record, given they won’t have heard of Dai Yongge a few days ago, it’s likely someone is working on his behalf in Portugal, an agent, and talking up the whole project.