Rangers are yet to appoint a new manager after allowing Steven Gerrard leave Ibrox to take the vacant job at Aston Villa last week.

Giovanni van Bronckhorst has emerged as one of the main candidates and De Telegraaf has a report, titled: ‘All of Rangers are counting on Gio’.

Rangers want to soon bring in Gerrard’s replacement and the 46-year-old, for now, has the ‘best papers’ to be the new manager at the Scottish Premiership champions.

At the weekend, the Dutchman held talks with Rangers sporting director Ross Wilson at a hotel in London and explained his football vision, among other things.

The club also informed Van Bronckhorst about the current situation and their plans for the future. 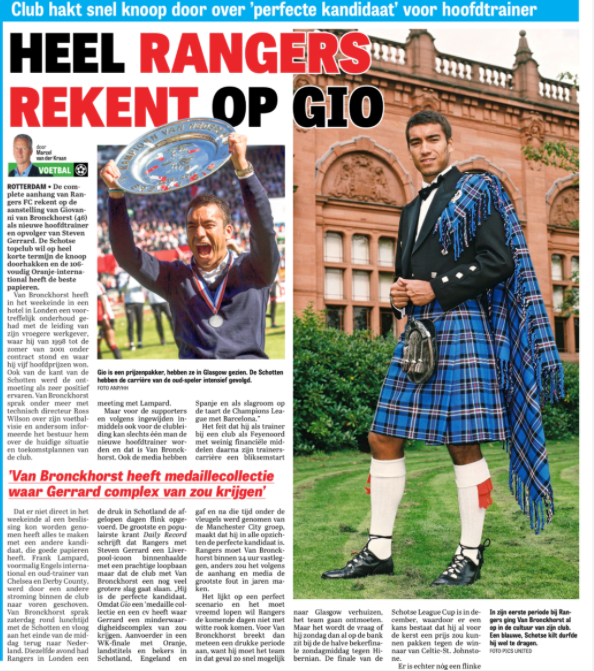 A decision, however, wasn’t taken immediately and this has to do with Frank Lampard, who De Telegraaf state is also in contention to become Gerrard’s successor.

The Dutch newspaper states someone within Rangers has pushed his name forward and officials also met the former Chelsea star in London at the weekend.

Apart from fans, insiders state that for the Rangers management, only one man can become the new manager and that is Van Bronckhorst, mainly due to his role in helping Feyenoord win the title with a limited budget.

De Telegraaf state: ‘Rangers must capture Van Bronckhorst within 24 hours, otherwise, according to the supporters and media, it would make the biggest mistake in years. It looks like a perfect scenario and things have to get weird if Rangers don’t come up with white smoke in the next few days.’

Rangers take on Hibernian in the Scottish League Cup semi-final at the weekend and it’s not clear whether a new manager will be on the bench for the cup tie.

The incoming manager also has the task of assembling his backroom staff since Gerrard’s staff followed him to Villa Park.

Van Bronckhorst is being pushed forward, ahead of Lampard, by supporters and those within the club. His style is similar to that of the ex-Liverpool star and if the Dutchman takes over, then ‘hardly any adjustment’ is needed for the current crop of players at Ibrox.