The idea of Philippe Coutinho moving from Liverpool to Barcelona during the winter transfer window, rather than next summer, is one which has been pushed repeatedly in Catalonia this week.

Marca, a Madrid based Spanish newspaper, claim Barcelona sources have told them there’s no great hope over a January deal, and no desperation to make it happen, seeing as Barca are aware how difficult such a transfer is during the winter window.

Comments from a Barcelona director this week that Barcelona have the money to sign Coutinho in January are all over the English media, and that reaction has made it’s way back to Mundo Deportivo.

The Catalan newspaper are happy with the fuss being caused, seemingly spurred on by English excitement, but forget their own warning of a day before.

Mundo Deportivo’s article about the fuss being caused by Barcelona talking up a January deal is carried on page 9, below the day’s big thoughts from Xavier Bosch. That’s quite interesting, because one of his big thoughts on Thursday was how much of a mistake those comments from Oscar Grau are.

Barcelona director Grau told the Spanish media on Wednesday: “We are ready to sign Coutinho in January.” 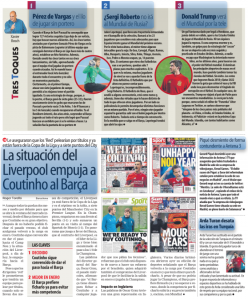 Bosch on Thursday insisted, as part of his Mundo Deportivo column, that those comments were a big mistake and handed power to FSG to ask a silly price. He called it ‘The sin of saying that there is money for Coutinho’ and ‘A slip that can cost dearly’.

Of course, Bosch was right, and that warning has to still hold, but Mundo Deportivo have conveniently forgot… because they’re overcome with excitement at what’s on the back of a few English newspapers.

Despite knowing better, despite pointing out a day earlier, on the same page, that it’s not the best plan, Mundo Deportivo have got carried away in the rush and don’t even mention the warning carried a few inches higher on Thursday.