Sporting continue living a tough situation with left-back Marvin Zeegelaar. The club’s wish is to sell the player in the summer window, but it’s been hard to find anyone to both please the player and make a reasonable offer.

O Jogo comes up with a story today saying there are two potential destinations for him this time: England and Turkey.

When speaking of England, they obviously recall that Norwich City were once a possibility. The Canaries had reportedly found an agreement with Sporting last summer, but Norwich were rejected by the player. 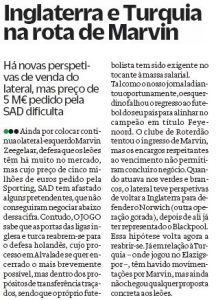 O Jogo says “this possibility is reopen”, although they don’t make it clear if they mean England or Norwich City. It had already been reported that the Canaries would be back for him a few months ago, so both scenarios are possible.

Sporting are said to be demanding €5m for the transfer, and the newspaper makes it pretty clear Zeegelaar is asking for big wages. So Norwich may have difficulties to convince him once again, unless there’s some good money to be spent.