The front page of Sunday’s A Bola is largely taken up by Joao Felix, which isn’t such an unusual thing these days.

Benfica’s president has been speaking to the Italian media and the Portuguese newspaper have picked up his words, which seem to boil down to: We’ll get a lot of money for Joao when we sell him.

Also on the front page is a small snippet which is of Wolves interest.

‘Wolves want Gedson’ – Straight and to the point.

Inside it’s explained that the Premier League club have been scouting Benfica matches recently. This is true, and a strangely unusual step for Wolves. 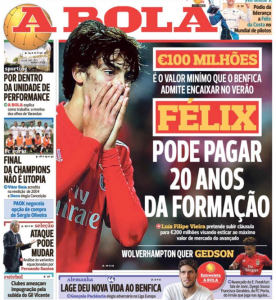 Despite all their Portugal related signings, they’re certainly not one of the clubs who scout most in the country, so their recent trips have been notable.

It’s claimed that Gedson Fernandes is the target, with Wolves potentially looking at him as a replacement for Ruben Neves, should the former FC Porto player leave the club.

Gedson is a 20 year old central midfielder who is enjoying a breakthrough season. Coming from the youth team, he has 30 senior appearances so far in the current campaign. 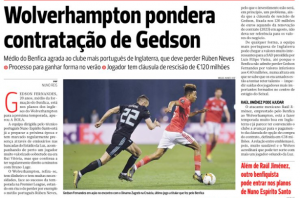 These numbers give him less experience than Neves had when he moved to Wolves.

That was in the Championship, so requiring Gedson to replace Neves in the Premier League would be a big ask.

If possible, a better scenario would be to sign the Benfica youngster and ease him in for a season before the darling of the Wolves fans leaves.

A Bola explain Gedson has a €120m release clause, and Benfica want no less than €40m.