When The Telegraph reported yesterday that David Moyes is unlikely to remain in charge of West Ham after the end of the season, the focus was mainly on the Scottish manager, even though the article mentioned Rafa Benitez and Marco Silva as possible contenders for the job.

But we could expect a different reaction from the Portuguese press, who today, puts a pretty big picture of Marco Silva in one of their pages to say he’s on West Ham’s list for the next season.

They get excited by this kind of thing in Portugal, filled with pride.

Newspaper A Bola, just like the rest of the Portuguese press, doesn’t have any exclusive information on the rumour. But they take the claims from the Telegraph and add a few reasons why Silva is still a strong name for Premier League clubs. 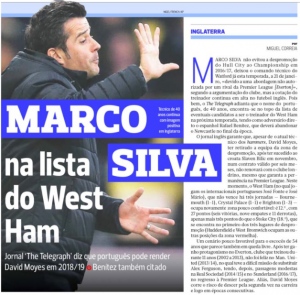 What A Bola does is basically praise Silva and demote Moyes.

They claim that even though the Portuguese boss couldn’t avoid Hull City’s relegation and was sacked from Watford due to contacts with another club, he ‘continues with a positive image’ in England and ‘is on top of the list’ to take charge of West Ham.

Regarding Moyes, they say the manager ‘seems to be in free fall’, ‘running the risk of being relegated for the second time in his career and in consecutive seasons’.

The Portuguese press are clearly backing their man for the Hammers, which may give an indication as to what Marco Silva’s own opinion would be.