With Porto currently feeding the dream of signing Pepe from Besiktas this summer, newspaper Record has a big story about it today.

They say it’s a bit unlikely the Dragons can have the defender back now, as he only plans to return to Portugal in two years.

Pepe would like a transfer to China, which is now impossible as their transfer window has already closed. And since he doesn’t want to accept the offers from Qatar and Saudi Arabia, his future remains undecided.

But there’s also the interest from Wolverhampton Wanderers, which has been pushed out for a few days, and Record brings some interesting words on the rumour. 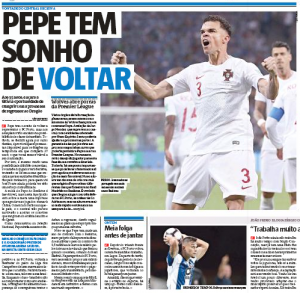 Taking the stories that come from the English press, the newspaper adds that Pepe’s good relationship with agent Jorge Mendes could favour a move to Wolves.

They make it clear that it’s the player himself who will pick his next destination, but there’s something at the Premier League club which could harm his performances: the defending system.

Record points out that Nuno Espírito Santo likes to play with three central defenders, and Pepe hasn’t played in that formation for Besiktas or Real Madrid. Only in a few matches for Porto, but at the time, he was ‘younger and faster’.

We’re pretty sure that the Portuguese manager knows what he’s doing if he has Pepe as a target, but maybe what Record wants to point out is that the player may not want to take on such a challenge at this stage of his career.