Home Championship From Portugal: Wolves set to battle with Greek club for right-back, should...
SHARE

After some claims from the Italian press, it’s now the Portuguese media who writes that Wolves are keen on Bruno Gaspar from Fiorentina.

The information is found in a very unlikely story today, which is actually about the manager Pedro Martins taking charge of Greek side Olympiacos.

Portuguese newspaper Record claims that the boss is interested in signing Gaspar to join him at the club, but for that to happen, there should be some competition from the Wolves.

There’s no information on how advanced the talks are from any of the clubs, so Record makes it sound like there’s just some interest from both sides. 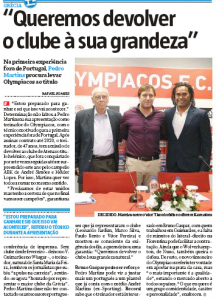 The lack of game time the player has been having in Fiorentina is said to be making things easier for Olympiacos, although it’s clear that it should be the same for Wolves.

Between playing in Greece or in the Premier League, we have no doubt of what Gaspar would pick. But now it’s a matter of seeing if Wolverhampton’s interest in the player is real.