With less than 10 days left in the winter market, the Tyneside club are looking to further bolster the defence for the second half of the season.

The Magpies have been linked to a handful of centre-backs and are also looking to sign a new left-back before the window closes.

The English club are not alone in keeping tabs on Grimaldo as the report states he is also wanted by his former club, Barcelona. 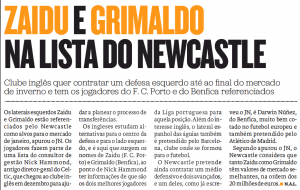 Sanusi and the Spaniard have contracts with Porto and Benfica until 2025 and 2023 respectively. The Portuguese newspaper states Newcastle consider both of them to have a similar valuation, of about €20m.