The Lindelöf family became the latest in football to be the victims of a burglary, as Maja Nilsson Lindelöf was forced to hide in a room with their children on Wednesday evening, as criminals targeted their house.

Victor Lindelöf was playing for Manchester United, away at Brentford in the Premier League, and the tactic of targeting the homes of footballers whilst they’re clearly away is one which is sadly continuing.

The defender’s wife took to social media to explain what had happened, and that the family had travelled to Sweden to be with family, looking to recover from the clearly frightening ordeal.

Naturally, the situation is a big deal for Swedish newspaper Aftonbladet, who feature it in their Saturday edition.

Aftonbladet contacted Manchester United to get the club’s view of the situation, and press manager Karen Shotbolt is quoted as telling them: 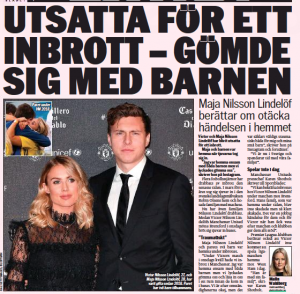 “We can confirm the burglary of Victor Nilsson Lindelöf during the match against Brentford. His family, who were at home in the meantime, were not injured but of course shaken. It was a difficult event for them and for Victor when he found out after the match, and the club gives them all the support.”

The Sweden international will be unavailable for Ralf Rangnick on Saturday, as Manchester United face West Ham, with Shotbolt adding: “He is with his family.”