Last Monday, The Sun published a story saying José Mourinho was fighting to bring Southampton’s José Fonte to Old Trafford, and Ed Woodward wants the manager to get rid of some other players first.

The article was a big hit in Portugal. And the newspaper who gave it most attention was A Bola, who have a big headline on Wednesday saying “Mourinho in war because of José Fonte”. 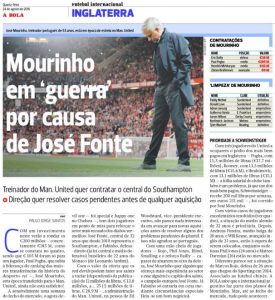 Most of A Bola’s story is based on The Sun’s information, as they obviously treat a story about a Portuguese manager wanting a Portuguese player in the Premier League as a big thing. But there are a few takes from them that are quite interesting.

First, they say Fabinho from Monaco is a possibility for Manchester United, but only in special conditions. By that, they mean that the right-back would only join the Red Devils if they find it “good business”.

The other is an exclusive information (and they make it pretty clear) saying Mourinho wants Marcos Rojo to stay. They say his situation is different to other defenders, claiming the likes of Phil Jones and Matteo Darmian are already on the market, but the Argentine is part of the manager’s plans.

However, until the end of the market, “anything can happen”.

It’s worth remember that Marcos Rojo played in Portugal for two years before joining Manchester United, so A Bola’s source isn’t necessarily someone close to José Mourinho.