This weekend, there were reports from the English media saying Manchester United have some kind of preferential right to sign Sporting youngster Luís Gomes.

It was claimed that even though the player has just signed his first professional contract with the Lions, he could actually move to the Red Devils in a £14m deal.

Well, newspaper Record went after this story, and they totally dismiss it in a short article today.

They’ve heard an ‘official source’ from Sporting who claims that such information ‘has no foundation’. Manchester United have no right to buy the player, and the amount for his departure isn’t set. 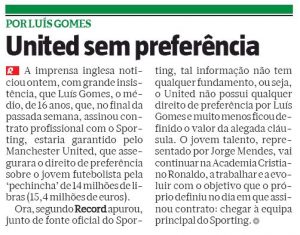 Record claims that Gomes, who’s represented by Jorge Mendes, will continue to work normally and try to reach Sporting’s first team one day.

The newspaper even pokes the English press saying this option has been reported with some ‘insistence’ by local outlets, and they’re now pretty sure that Manchester United would have to negotiate normally for a possible transfer in the future.