Portuguese giants Benfica have reportedly rejected an offer from Liverpool for the club starlet João Félix.

As reported by newspaper Correio da Manhã today, the Reds have made a bid of €70m for the 19-year-old.

Benfica president Luís Felipe Vieira believes that the amount put forward by Jürgen Klopp’s side is not enough to take the wonderkid, who has recently signed a contract extension and is now protected by a €120m release clause.

Correio da Manhã adds that many other clubs are interested in the player alongside Liverpool, including Manchester City, Paris Saint Germain, Barcelona and Monaco. 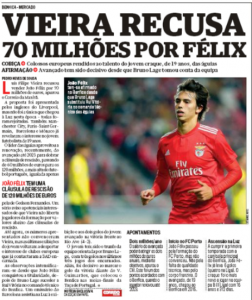 The midfielder has been getting a lot of attention since his debut for the Eagles, and now the scouting jobs got more intense since he got a starting spot in the team.

Felix is on the front page of newspaper Record today as well. They say that Manchester United, Manchester City and Barcelona are all keen on the player, and claim that even Portugal manager Fernando Santos is planning to call up the teenager.