Sporting winger Jovane Cabral has finally recovered from an injury which has left him sidelined for most of the season so far.

His return gives manager Silas the first chance to have all of his players available for a game, as the Lions face Moreirense on Sunday.

When speaking of the 21-year-old, Portuguese newspaper Record claims interest from some clubs, including Fulham, could be revived in the January transfer window.

The outlet reports that since Jovane has only played few minutes this season, his valuation has certainly gone down since the summer, and that could be an encouragement for the clubs to go after him again. 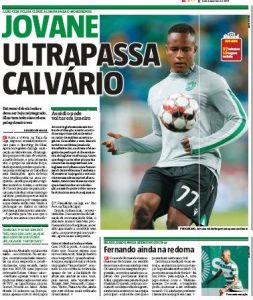 Record writes that a few months ago, Sporting received two concrete loan offers for the player. One from Fulham and another from Saint Etienne.

Even though the clubs couldn’t see a lot from him this season, they could take his devaluation as a sign that his transfer will be easier in the January transfer window.