It seems the Portuguese media isn’t really counting on the return of Matheus Pereira to Sporting at the end of the season.

With the Brazilian doing pretty well in his loan spell at West Brom, it’s becoming obvious that a permanent transfer will be made in the summer.

Newspaper O Jogo has a story about Sporting’s current transfer negotiations, saying there are talks for Palhinha to move to Real Betis soon.

And they also include a paragraph about Pereira, saying there’s the ‘strong possibility’ the player will be sold at the end of the season. 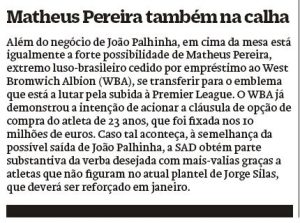 They say West Brom ‘have already shown the intention’ of keeping the 23-year-old, and would use the €10m buying option to do that.

Last week, we reported there’s actually an obligatory clause in the midfielder’s contract, and it will be automatically triggered in case he makes 32 appearances for West Brom or if the club get promotion to the Premier League.

Either way, it seems a matter of time until Pereira signs for the Baggies on a permanent move.