Portuguese newspaper A Bola has some interesting and strong claims about West Ham United and Paulo Fonseca this Saturday.

It starts with their headline saying the Hammers have made an approach for the manager, who they believe should be leaving Shakhtar Donetsk this summer.

That makes it sound like just another transfer rumour, with things still in the early stages, with maybe the negotiations developing during the summer.

But the rest of the story completely goes for it, saying that Fonseca should soon take charge of the London side. 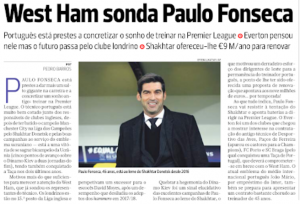 Shakhtar have offered the manager a new salary worth €9m per season, while Everton also contacted him, but he ‘should commit to West Ham soon’, to use the newspaper’s own words.

It’s weird to see this excitement because A Bola literally says that West Ham have only gone as far as an approach. So maybe the manager was really, really excited with this contact, because the optimism seems quite big.

Fonseca has been repeatedly linked with Everton as an option to replace Sam Allardyce, and was also reportedly of interest to the Goodison Park club before they appointed their current manager.

Claims of West Ham interest in Manuel Pellegrini have come from both Chile and Spain recently, so perhaps the club aren’t entirely satisfied with David Moyes.