Home Championship AFC Bournemouth From Portugal: Chris Willock ‘on his way out’, but Leeds United are...
SHARE

Bournemouth and Newcastle United apparently continue to be in front in the race for Benfica attacker Chris Willock.

The Premier League interest was first reported by the English press last week, and after the confirmation from the Portuguese media that he should be leaving on a loan deal in January, they now insist that the Magpies and the Cherries are after him, with no mention of Leeds United.

Newspaper A Bola says these are the only clubs who are keen on the player, although none of them seem very close on getting him.

Despite saying Willock is ‘on his way out’, the outlet claims that no decisions have been taken yet, and are unlikely to happen in the next few days. 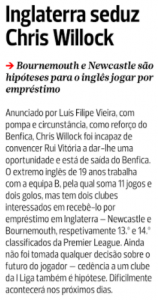 Interestingly, Leeds United and Millwall, both named by The Mirror as other contenders, are forgotten in A Bola’s story.

As A Bola doesn’t make it clear if the information about the interested sides is their own or not, it’s hard to tell if the Championship clubs have given up on the player, or if they are not attractive enough to make it to the article, something we find unlikely.

Leeds United rumours occasionally pop up in the Portuguese media, and the Championship is taken very seriously as a league.

As we pointed out last week, Leeds United could turn out to be a good way out for the player, who could end up getting decent game time in a competitive league.

As the newspaper claims that even a transfer to the Portuguese second division is on the cards, there’s no reason to believe the player wouldn’t head to the Championship.