In the last few weeks of the summer window, Chelsea were interested in signing Sevilla star Jules Koundé, but were unsuccessful in their efforts to secure the centre-back’s signature.

Monchi, the sporting director of the La Liga side, confirmed the Blues submitted an offer, but it didn’t meet the demands set by Sevilla. The defender has an €80m release clause.

Didier Deschamps included the 22-year-old in his France squad for the ongoing international break and even started him in the right-back position against Bosnia & Herzegovina.

The tie ended in a 1-1 draw and Les Bleus were reduced to 10 men in the 51st minute after Koundé was shown a red card.

When discussing the reasons for the former Bordeaux man’s frustration, L’Equipe suggest his failed move to the west London club could be one of the reasons. They question if the collapsed transfer to Chelsea could have ‘polluted his mind?’.

The newspaper states Deschamps shouldn’t start the Sevilla man on the right side of defence again. 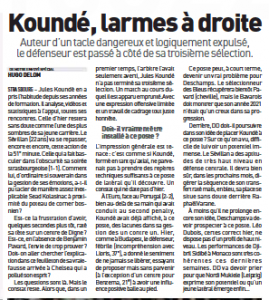 Although Julen Lopetegui’s man has ‘very high skills’ to operate in the heart of defence, it’s said his place is ‘undoubtedly behind Raphaël Varane’.

L’Equipe warn Koundé he must ‘digest the sequence of his failed transfer’ to Chelsea.