Home Championship ‘In limbo’ – Player in ‘no man’s land’ after deciding against joining...
SHARE

Barcelona’s Álex Collado was on the verge of completing a loan move to Sheffield United on deadline day, but the deal never went through.

On Wednesday, Mundo Deportivo stated the operation to take the 22-year-old to Bramall Lane collapsed at the ‘last minute’ and didn’t detail the reasons for the failed transfer.

Today’s edition of Sport says the midfielder is ‘in limbo’ and is ‘left in no man’s land’ after he didn’t join the Blades.

Barca reached a loan agreement with the Championship side, but the player ‘did not do the same’, even though he had initially given his approval. Only signatures were missing and those never came.

Collado was expected to move to England, which is why the Catalan club didn’t register him with La Liga, nor with their B team. Sport say Barcelona hope to resolve his situation soon.

Mundo Deportivo add his case is ‘especially curious’ because the UEFA transfer system ‘registered his departure’ on loan from the Camp Nou, but not his arrival at Sheffield United, which was cancelled at the ‘last minute’. 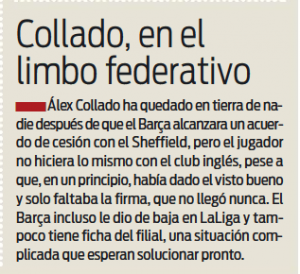 Therefore, the player is in a ‘kind of limbo’. It’s made clear he will not have opportunities to play under Ronald Koeman this season.

Mundo suggest Collado’s chances of moving to a club where the transfer window is still open, like Russia, Turkey, the Middle East etc is not yet ruled out.