After his time at Spurs, the Argentine has not returned to management, but that could change soon, if journalist Miguel Rico is to be believed.

Writing on the last page of today’s edition of Mundo Deportivo, Rico claims Newcastle United could be the 48-year-old’s next destination.

Steve Bruce is currently in charge at St James’ Park and the Magpies appointed him as Rafael Benítez’s successor last summer. The Tyneside club have managed only 11 wins in 34 league games, which has left them in 13th spot.

According to Rico, Pochettino ‘is close to Newcastle’, meaning the English side are set to replace Bruce with the former Southampton boss.

Barcelona wanted the South American coach to replace Quique Setién next season and Benfica were the latest side to approach him.

Mundo say Pochettino has rejected ‘many offers’ because his desire is to continue in the Premier League. 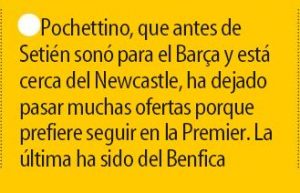 A Saudi backed consortium are looking to takeover Newcastle, but they are facing complications sealing the deal. It’s not clear whether or not Pochettino would still be interested in joining them, if the change of ownership doesn’t go through.