The midfielder is said to be attracting interest from Barcelona and Juventus and a return to the Turin club will be more attractive due to the new tax law that was implemented in Italy since the start of 2017, report Mundo.

If a player obtains money from image rights outside the country, he will only have to pay a fixed tax of €100,000.

Pogba has received a strong proposal from the Old Lady to rejoin the Serie A winners and Juventus are ready to sacrifice Miralem Pjanic to accommodate the France international.

Massimiliano Allegri’s side are ready to offer the ex-Roma man in order to lure the Red Devils to sanction their player’s sale. The report claims this would allow United to let their unhappy player leave and replace him with a tactical player in Pjanic.

Barcelona are also ready to offer Yerry Mina and Andre Gomes to United as part of the deal for Pogba, who, according to the report, dreams of playing alongside Lionel Messi. 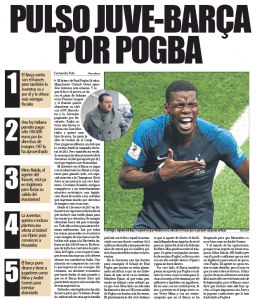 A worrying part of the Mundo Deportivo article for Manchester United is this: ‘And in charge of operations, because he is an expert in forcing transfers, Mino Raiola. MD spoke with him yesterday and could confirm that he is already in England to attack the Pogba operation. The agent did not want to go into more details, but the fact is that he is already on the ground.’

With the transfer window in England closing on August 9th, it is highly unlikely that Manchester United will allow Pogba leave the club, despite interest from Barcelona and Juventus.